Choosing the ideal bathroom taps for your space is an important decision. Taps are often the finishing touch to your bathroom and will have a big impact on the overall style of your bathroom design. To meet the array of different bath styles now available designers have been quick to create a wide range of different bath tap designs. This ensures you can create a unique finish for your bathroom. In this blog we will look at 5 different types of bath taps from our extensive range. All of which will bring a luxurious and stylish finish to your space. 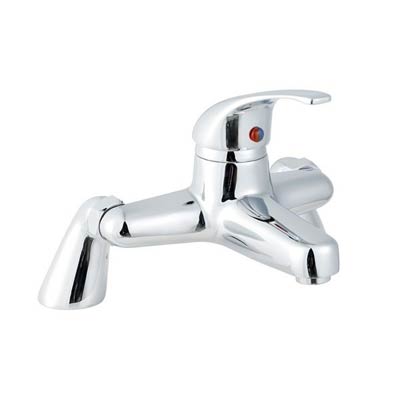 Basin mixer taps are quite common in modern tap design however bath mixer taps that are mounted on the bath are less common. This minimalist design has a single lever to operate the flow and temperature of the water. The Premier Eurostyle Single Lever Bath Filler Tap is suitable for baths with two tap holes. It also features ceramic disc technology which ensures simplistic operation for the user. This tap is available in the matching basin mixer to give a coherent finish for your bathroom. 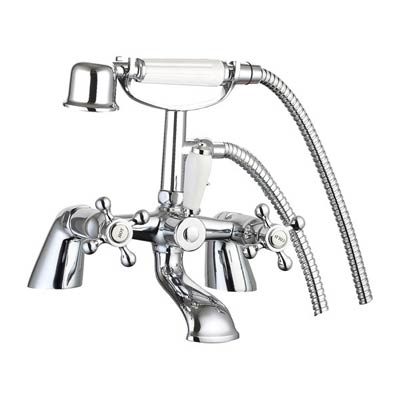 Bath Shower Mixer Taps give you an additional shower handset. It allows you to switch between the regular taps and shower handset via a diverter. Therefore it is ideal for rinsing shampoo out of your hair or indeed rinsing the bath out after use. This style of tap tends to be grander in its design and is a fabulous choice if you are aiming for a more traditional feeling in your bathroom design. The Zenith Cambridge Traditional Bath Shower Mixer Tap has period cross head lever handles and the handset sits above the taps in a chrome holder to give a lavish appearance. These taps feature vintage white disc tap indicators. The diverter lever also features this white detailing which is indicative of the era it is intended to suit.

Much like the bath mixer taps the bath filler will ‘mix’ the flow of water through a single spout. However bath fillers have separate controls for the hot and cold water supplies. This Frontline Flo Bath Filler Tap features an ultra stylish waterfall spout design that will create a real wow factor for your bathroom. The geometric shaped levers are a 90 degree rotation to operate giving these taps a contemporary look and feel. These stylish taps also require a bath with two tap holes. Like all the modern tap styles these are finished in stunning chrome which brings a luxurious finish to your bath. This Flo filler is also offered with a lifetime guarantee making it a popular choice here at Bella Bathrooms.

To create a truly contemporary finish for your bathroom choose a super stylish wall mounted bath filler. These create a completely different look to the old style of traditional pillar taps! Wall mounted bath taps are available in modern and traditional styles and will create an attractive finish for your bathroom. A popular selections is the Ultra Helix Wall Mounted Bath Filler Tap which has a simplistic yet stunning design. The slender spout gives a sleek finish and the minimalist single lever controls both the flow and water temperature. This tap can also be bought in the basin version to complete the look across your bathroom design.

With the range of freestanding baths becoming more accessible to people across a range of different budgets a selection of freestanding taps have been developed to perfectly complement the baths. These elegant taps are statuesque creating a unique focal point of their own. In addition these taps plunge water into your bath creating a stunning visual. The Eurostream Primo Floor Standing Bath Shower Mixer Tap has a simplistic soft design that features an additional shower handset. It has the modern quarter turn mechanism to operate the single lever which controls the flow and temperature of the water. This type of tap will help you to recreate hotel glamour in your own bathroom.

With such a fantastic range of bath taps available there is no excuse for not finding the perfect accessories for your bathroom space. Check out our cheap bathroom taps to find top quality taps at very affordable prices. If you find this blog post interesting then you may also be interested in our 10 Statement Bathroom Taps Blog.